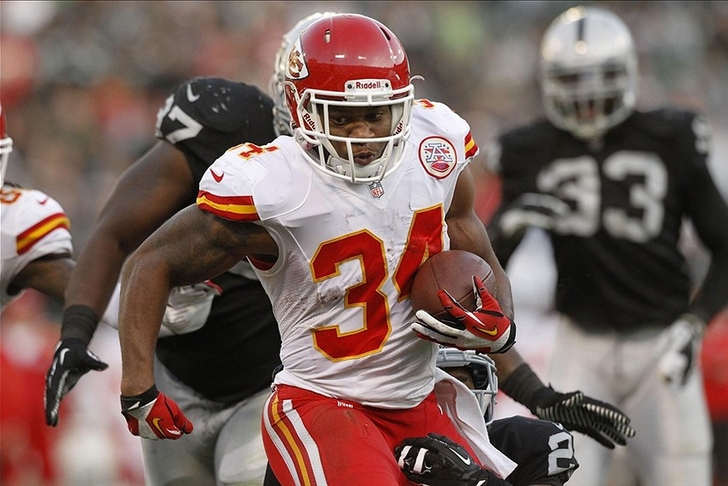 A low-scoring first half had the Chiefs up 14-3 at the half, despite playing without Jamaal Charles.

Both offenses began to pick things up, with each scoring a touchdown early in the second half.

Still, both Smith and Tannehill faced relentless pressure and were unable to find receivers on a regular basis.

Knile Davis and Lamar Miller took over their respective offenses, keeping the ball on the ground for the majority of the second half.

Alex Smith threw for three touchdowns in the redzone, finishing with 186 yards on an efficient 19/25 passing.

Knile Davis posted 132 rushing yards and a touchdown, looking shifty on a number of nice runs.

The Dolphins defense helped get Miami back in the game, recovering a fumble early in the third quarter to set up a Tannehill to Hartline touchdown.

They recorded a safety late in the third quarter, pulling the Dolphins within six points at the time, but were unable to keep the Chiefs off the board at crucial points.

Lamar Miller had a fantastic game, ripping off a number of huge runs on his way to 108 rushing yards on 15 carries.

Turning Point: Up by just six points, the Chiefs offense took the ball 44 yards and took 4:39 off the clock, punching in a touchdown with just 4:30 minutes left to go, icing the game.

1) Jamaal Charles is obviously the Chiefs starting running back when healthy, but Knile Davis proved yet again that he is capable of shouldering the load if needed.

With that in mind, the Chiefs could scale back Charles' workload to keep him healthy, knowing they have a more than capable backup.

2) The Dolphins are still reluctant to open up the offense, playing mostly conservative with short passes and runs.

Until Tannehill can get on the same page with his receivers and improve his accuracy, the offense will have to remain conservative.

The Chiefs host the Patriots for Monday Night Football, while Miami travels to Wimbley Stadium for the international game against Oakland.