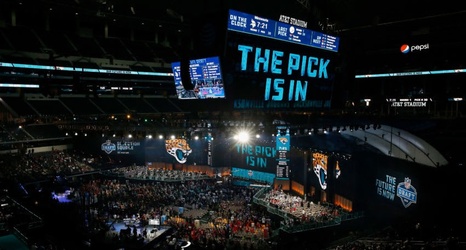 ARLINGTON, TX - APRIL 26: A video board displays the text 'THE PICK IS IN' for the Jacksonville Jaguars during the first round of the 2018 NFL Draft at AT Photo by Tim Warner/Getty Images

The Jacksonville Jaguars really don’t need to put effort into their draft selection process until the 25th overall pick comes along. It’s quite clear that they will select quarterback Trevor Lawrence number one overall—unless they shock everyone and go in a completely unexpected direction, but that’s unlikely.

Following the selection of a quarterback with their first pick, the Jaguars have five very likely positions they will target with their next three picks (25th, 33rd, and 45th)— safety, tight end, wide receiver, defensive tackle, and offensive tackle.