Jaguars lose James O’Shaughnessy for the remainder of the season 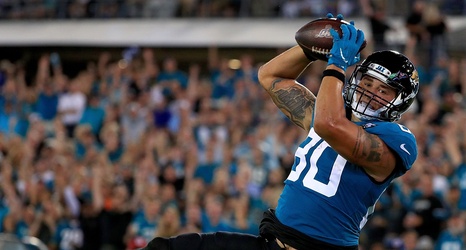 The Jacksonville Jaguars offense took a hit once again on Monday when it was determined that tight end James O’Shaughnessy suffered a torn ACL in the game on Sunday against the Carolina Panthers. O’Shaughnessy, who has caught two touchdowns this season and has played an important role in the passing game, will have surgery to repair the injury when swelling he subsided.

NFL Network’s Ian Rapoport was the first to make the announcement via his Twitter account Monday afternoon. The injury becomes even more significant because rookie third-round pick Josh Oliver has been working to get into an NFL game for the first time this season after suffering a severe hamstring injury prior to the preseason.