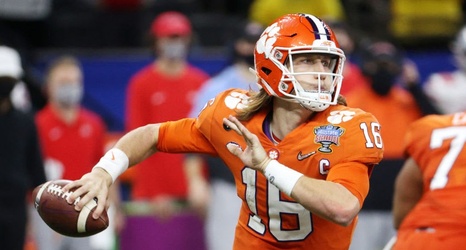 NEW ORLEANS, LOUISIANA - JANUARY 01: Trevor Lawrence #16 of the Clemson Tigers looks to pass in the second half against the Ohio State Buckeyes during the College Football Playoff semifinal game at the Allstate Sugar Bowl at Mercedes-Benz Superdome on January 01, 2021 in New Orleans, Louisiana. (Photo by Chris Graythen/Getty Images)

Potential 2021 first overall pick Trevor Lawrence will have a chance to change a trend Jacksonville Jaguars first-round quarterbacks have been a part of.

Head coach Urban Meyer recently had the chance to talk to NBC writer Peter King, and although he didn’t outright announce that the organization would be drafting Lawrence with the first overall pick, he said, “that’s the direction the team is going”.