Ask, and you shall receive: Jaguars’ defense forces multiple turnovers for first time this season 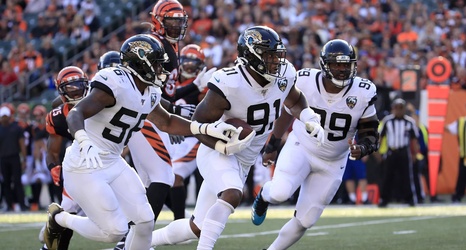 Last week, following a close loss against the New Orleans Saints, I wrote about how the Jacksonville Jaguars need to force turnovers. At that point, the Jags had just two takeaways on the season, and only one of which was forced by the defense.

I ended that article with the following thought:

With an 0-6 Cincinnati Bengals team on the clock, this may be a get right game for both the Jaguars to get back on the winning track, and for the defense to force more turnovers. The Bengals have had 11 turnovers through six game, and have at least one turnover in five of the team’s first six games this season.