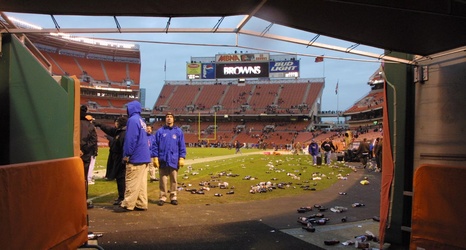 This year marks the 25th season for the Jacksonville Jaguars. To celebrate, we’re counting down 100 days from our regular season kickoff with the top 100 moments in franchise history.

Yesterday it “WHOA THERE, MOTHERFUCKER!”

The Jaguars have an interesting history with the Cleveland Browns — they were the last team the original Browns played before leaving for Baltimore, they played in the game in which Orlando Brown was hit in the eye with a flag, and the Browns’ miracle Hail Mary to beat the Jaguars in 2002 was probably the final nail in Tom Coughlin’s coffin.