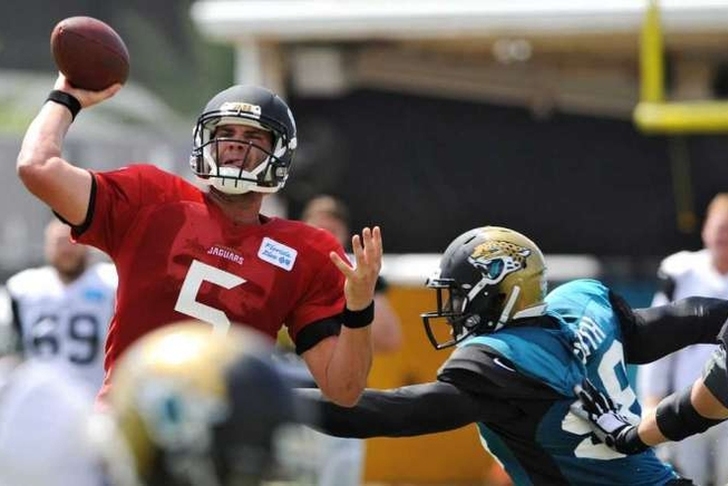 The Jacksonville Jaguars had another disappointing season in 2014, falling from 4-12 in 2013 to 3-13 while watching key young players struggle to acclimate to the pros. This year feels different, however, with changes and renewed confidence the name of the game as training camp progresses. With that being said, here are three thing we've learned about the Jags so far in training camp:

Watch the second-year Jags QB in camp and there's a completely different air around the kid. Bortles was a progression-and-footwork mess last season and a fair amount of that started with an inconsistent run through the spring and summer of his rookie year. The Central Florida product has been garnering rave reviews from coaches and skill position players alike -- usualy a great sign that there's substance behind the hype of Bortles' year two rise.

The offense is much, MUCH different

The Jags are installing a brand-spanking new offense under recently-installed OC Greg Olson, and it's a set of schemes that appear to be custom fit for the team's offensive talent. First look into camps shows a rejuvenated Toby Gerhart and the aforementioned Bortles getting a chance to take charge and help influence the direction the offense will take. It's hard to say how that will translate to gamedays, but it sure is exciting to think about.

Yeldon was brought in to compete with Denard Robinson for the starting running back job, but according to John Oehser of Jaguars.com, Yeldon has turned heads. Olson has loved what he's seen from the young rookie:

"We liked what we saw there. That was not a question mark for us, but I think people outside questioned whether or not he would be able to step into the National Football League and be good enough as a pass protector. We liked what he brought physically and I thought he attacked the linebackers. We’re excited about him. He’s made a couple of very nice runs in the open field and made some people miss. We’ve been excited about what we’ve seen so far."

Follow our Jacksonville Jaguars team page for the latest Jags news and rumors!