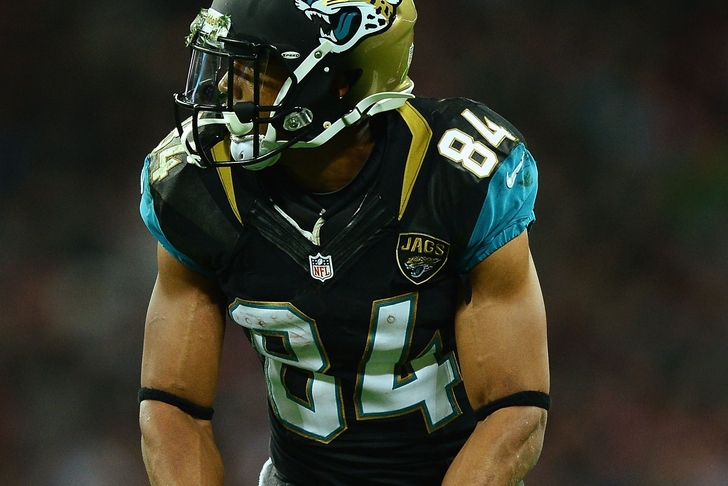 The Jaguars predictably struggled to a 4-12 record. Their offense was the worst in the NFL, by a large margin, according to Pro Football Focus (subscription required). Their defense was better, but still needs improvement. The Jaguars have cap space and a lot of draft picks, especially in the middle rounds. The Jaguars have several needs and got the chance to coach the South team in the Senior Bowl.

1. Quarterback: The Jaguars started Chad Henne and Blaine Gabbert last season. Clearly, they desperately need an upgrade. One of their first picks should be spent on a QB.

2. Defensive End: The Jaguars need to find a way to improve their league-worst pass rush. Tyson Alualu was a reach when the Jaguars drafted him in 2010 and has not come close to playing like a top ten pick. Although he wasn’t awful against the run, he was the worst Jaguar in pass rushing, according Pro Football Focus. Jason Babin is an acceptable starter, but is aging. They just signed Red Bryant, but he is a run stuffer, not a pass rusher. More help is needed, either in free agency or the draft.

3. Left Guard: Uche Nwaneri is solid, but left guard Will Rackley was third worst guard in the NFL last season. The Jaguars might elect to upgrade this spot in free agency, but there could be some quality prospects in the middle rounds.

4. Running Back: Maurice Jones-Drew was the starter last season, but he will hit the free agent market in the offseason. I doubt he will be back, which leaves Jordon Todman as the starter with Justin Forsett, Delone Carter and Denard Robinson as the backups. None of those players should be starting, and it is a deep class for running backs.

5. Wide Receiver: Cecil Shorts is a solid No. 2 when healthy. Ace Sanders might be able to make it as slot receiver and return specialist. Mike Brown wasn’t bad, but he isn’t a player you expect to be a No. 1 or even a No. 2. The rest of the wide outs are nothing special. Justin Blackmon is talented, but is useless to the team if he remains suspended. The Jaguars should enter the offseason with the mindset that Blackmon won’t be back. It is a deep class for wide receivers, so a mid-round pick or two could be spent here.

6. Safety: Both Josh Evans and Johnathan Cyprien struggled during the season, but they were rookies. Cyprien has potential and should improve next season, just like he did as this season went on. Evans, however, was only a sixth round pick and can be upgraded.

7. Outside Linebacker: Geno Hayes was good in pass coverage, but was a huge liability in run support. Russell Allen was solid before getting hurt, but he could be upgraded as well. If the Jaguars can find value in the draft, taking a linebacker is an option.

8. Offensive Tackle: The Jaguars are set at left tackle with Luke Joeckel. However, they could upgrade the Cameron Bradfield/Austin Pasztor duo at right tackle. Using another high pick on tackle doesn’t make too much sense, but a mid-round developmental pick does.

Blake Bortles, QB, UCF: I’d be surprised if Teddy Bridgewater actually fell to the third pick. That leaves Bortles and Johnny Manziel as the likely candidates to be a first round selection by the Jaguars. I think Bortles is the more likely pick by the Jaguars, but they might take a pass rusher if one they like is still on the board.

Derek Carr, QB, Fresno State: I don’t think Carr will be on the board in the second round for the Jaguars. If he is, and the Jags took a pass rusher in the first round, Carr would be a good selection. The Jaguars got a good look at him in the Senior Bowl. A lot will change with regards to quarterbacks in the draft, especially with the Day 2 prospects. A team like the Jaguars will look at far more than just two quarterbacks.

Jadeveon Clowney, DE, South Carolina: The Jaguars desperately need pass rushing help, and there is no better option in the draft than Clowney. He is a freak athlete and has the potential to be one of the greats. The worst possible scenario is that Bridgewater and Clowney go No. 1 and No. 2. If that happens, the Jaguars might take a different QB or a player like Anthony Barr, who would be a solid fit as a ‘LEO’ DE for head coach Gus Bradley.

Jeremiah Attaochu, DE, Georgia Tech: This will surprise many, but Attaochu was the active career FBS leader in sacks last season. He can play at several spots at the next level, but is an ideal fit for the LEO role in the Jaguars defense. The Jaguars saw him up-close in the Senior Bowl. He should be available in the second round, but might not last to the third round.

Gabe Jackson, OG, Mississippi State: Jackson will be playing in the Senior Bowl, giving the Jaguars an up-close look at him. He might not be as talented as Cyril Richardson or David Yankey, but could start right away. He might be available in the third round.

Chris Watt, OG, Notre Dame: Watt was a reliable starter for Notre Dame for much of his time as a Golden Domer. He is a solid player, but not on the same level as the higher-rated guards. He will likely be a mid-round pick that shouldn’t start right away.

Tre Mason, RB, Auburn: Mason has great vision and has played great in big games such as the SEC Championship and BCS National Championship. He will probably be drafted before the Jaguars take a running back, but would be a good option if he slips.

Lache Seastrunk, RB, Baylor: Seastrunk is one of my favorite running back prospects, and I loved his performance in his bowl game. He has great vision and would be a good fit in Jacksonville. He might be available on Day 3.

Donte Moncreif, WR, Ole Miss: The Jaguars are in need of a big body at wide out as all of their current key players are six feet or shorter. While a player like Jordan Matthews would make sense in round two, I think the Jaguars are more likely to wait until Day 3 to pick a wide receiver. Moncreif is 6-foot-3, and with the plethora of receiving options in this year’s draft, he might slip to Day 3.

Cody Hoffman, WR, BYU: Hoffman is another big receiver, who would be a good fit for the Jaguars. Hoffman had a down year statistically and doesn’t have great speed. He could be a quality pick in the middle of Day 3.

Terrence Brooks, FS, Florida State: Brooks is a solid free safety prospect. The Jaguars have a solid strong safety in Cyprien and adding Brooks would be a good pairing. Brooks isn’t the biggest safety and is still a little raw, but would be a quality third or fourth round selection.

Kenny Ladler, FS, Vanderbilt: Ladler doesn’t have the ceiling Brooks does, but is a solid prospect in his own right. The Jaguars saw Ladler at the Senior Bowl. Ladler’s strengths would match up well with Cyprien’s weaknesses and vice-versa. He could be drafted on Day 3.

Kyle Van Noy, OLB, BYU: Van Noy would be a good fit for the Jaguars. He had a great year in 2012, but did not play as well this season. He strikes me as a perfect fit at strong side linebacker and can get to the passer. If the Jaguars spend a second round pick on a linebacker, a player like Van Noy or Ryan Shazier would make sense.

Ronald Powell, OLB, Florida: Powell left Florida early, which was surprising given his lack of production last season. He was a highly-touted recruit, but suffered two ACL tears in 2012. He could be an outside linebacker or a LEO defensive end. That versatility could appeal to the Jaguars. He will likely be drafted in the middle of Day 3.

Ja’Waun James, OT, Tennessee: James doesn’t get much publicity because Antonio Richardson, a likely high draft pick, played on the opposite end of the line with James at Tennessee. However, James is a solid prospect at right tackle. He might be drafted a little too early for the Jaguars, but he and Joeckel could make a solid bookend in a few years.

Seantrel Henderson, OT, Miami: Henderson has the potential of a first round pick, but has not come close to reaching it. He had his issues at Miami and has more flags surrounding him than a golf course. If the Jaguars are comfortable taking on the risk, he might be worth a mid-to-late Day 3 selection.