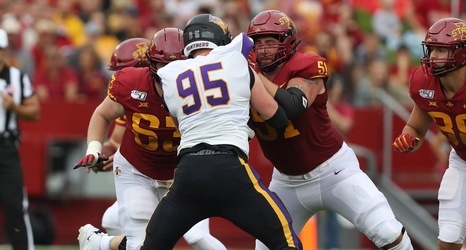 This will be a hard-fought, physical matchup in Ames on Saturday, and, as always, will probably be won or lost in the trenches. Iowa State’s defensive line is as rock-solid as they come, so there’s not much to worry about there. However, Iowa State’s consistently inconsistent offensive line is exactly why I’m picking Julian Good-Jones as the offensive player to watch this week. I have probably been the harshest critic of Julian Good-Jones out of all the Wide Right Natty Lite contributors for the last few years, but his matchup and play against A.J. Epenesa is going to be absolutely critical to the game on Saturday.