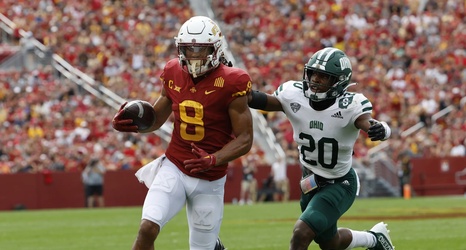 Iowa State took care of business at home on a soggy day against the Ohio Bobcats, winning by a final score 43-10.

The Cyclones took the lead early and never relinquished it, starting the scoring on an 11 play 69 (nice) yard drive, ending with a Hunter Dekkers touchdown run. After trading punts, Hunter Dekkers took over to get back into the end zone, as tight end DeShawn Hanika caught his second TD pass of the season to make it 14-0.

Iowa State would force two consecutive turnovers and convert both into 10 points to 24-0. Deon Silas would key the scoring drive, breaking off a 24 yard run on the way to the end zone.