Three Things to Watch for at Iowa Football Fall Camp 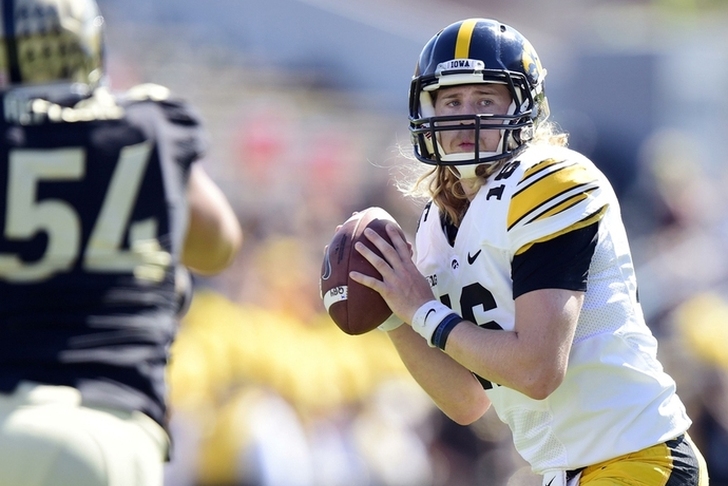 The Iowa Hawkeyes report to training camp on August 6th, and there is plenty of work to be done before they kickoff the season on September 5th. Here are three things you need to know going into training camp.

Ott's prominent performanfe on defnese goes beyond the stats he recordd in 2014. Without Carl Davis and Louis Trinca-Passat, the raw egg eating, haye bale tossing Ott, will be the foundation of the defensive line.

Last season, Ott recorded eight sacks, 12 tackles for a loss, and lead the defense in both categories. The second-team All-Big Ten selection is an excellent pass rusher and will prove that he is a top defensive end in the conference as he enters his final year in a Hawkeye unifrom.

Ott was recently named to the Big Ten players to watch list. If he produces this season we could potentially be looking at another high pick in the NFL draft. Watch how Ott drives the defense this season.

Jake Ruddock's transfer isn't a terrible loss for the Hawkeye offense, in fact the QB switch will allow Iowa to pressure opponents downfield instead of relying solely on running the football. Beathard's aggressive throwing style will come as a shock to fans, especially after two years of having the most conservative quarterback in the Big Ten.

In order for the offense to fully utilize the passing game, offensive coordinator Greg Davis will need to discover more recieving options besides Tevaun Smith.

Last season, Smith's performance was pivotal to Iowa's Offense, recieving 43 receptions and was the Hawkeye's leading receiver in yardage carrying 596 yards. In 2013 the Canada native started six saw action in all 13 contests, and finished the season with 24 receptions, one for a touchdown.

During the offseason Smith managed to grab the attention of many after he posted a clip of himself catching 41 single handed passes in 60 seconds without dropping a single one. Take that Odell Beckham Jr.

No doubt, Smith will be Iowa's top reciever by the end of the season, given the lack of talent on the receiving end he is one of Iowa's most valuable players on offense.

It will be interesting how Smith and starting quarterback C.J. Beathard work together during fall camp.

Following Iowa's spring game in April it was evident there was more work to be done before the Hawkeyes open with Illinois State in Iowa City.

There is a general mix of concern spreading around the Offensive line, although Boetteger and Myers were the clear replacements, there still remains uncertain whether the two rookies will be able to fill the holes of Shereff and Donnal. Boetteger has been able to pack on 70 pounds since arriving in Iowa City his freshman year. Myers will have the daunting task of living up to the shadow of Sherref who is worshiped by Hawkeye fans.

History has shown us that Iowa's success is determined from the offensive line. Pass protection was a critical issue during the spring. It will be up to veteran's Jordan Walsh and Austin Blythe  to bring the rookies up to speed. In 2015, the front five's sucess will be determined by how well Boetteger and Myers can progress in fall camp.

Iowa will have a strong start in preseason. They could possibly head into conference play with four wins. They will have a rude awakening first week of conference when they face Wisconsin in Madison on October 10.