The Morning After: Bell Rung 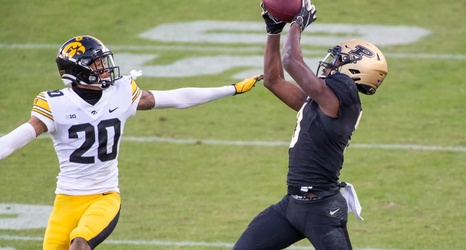 Once again, the Iowa Hawkeyes (0-1) allowed a receiver to run rampant over their secondary en route to a victory.

David Bell followed up his near-200 yard day last year in Kinnick Stadium by matching his reception total (13) for almost 80 less yards but triple the touchdowns as the Purdue Boilermakers (1-0) won, 24-20.

In other words, he, Aiden O’Connell, and Brian Brohm (with help from Jeff on his sofa) rung Iowa like a ... bell.

Further asserting Purdue’s emphasis on getting the ball to their best players, he is but two of six consecutive 100+ yard performances a Boilermaker receiver has had facing Iowa.