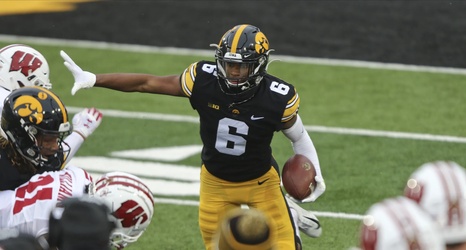 After mistakingly drafting a kick returner from Iowa State, the Minnesota Vikings righted the ship and took one from Iowa.

Ihmir Smith-Marsette is going to Minneapolis.

The move comes in the middle of the fifth round, during a draft where Hawkeyes have been dropping all weekend long. ISM was the second Hawkeye drafted in this class, behind Chauncey Golston.

Smith-Marsette could make an impact early on for the Purple, as he projects to be WR3 for a team that desperately needs another pass catcher behind Adam Thielen and Justin Jefferson, especially with tight end Kyle Rudolph no longer on the team.