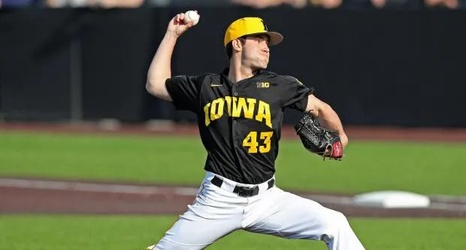 The Hawkeyes went into McClane Baseball Stadium at Kobs Field and swept Michigan State right off the map. The Hawks won 7-1, 7-4, and 11-3. Iowa’s Friday night ace, Trenton Wallace, led the way going 7 innings and striking out 9 batters. Wallace ended the year with a 7-1 record with a 2.34 ERA. The Hawkeyes won nine straight series openers; Wallace starting the weekends off was a nice recipe for Coach Rick Heller’s crew. Here is one of three doubles on the day (game 2) by Iowa slugger Peyton Williams. Williams was hurt for a portion of this season.