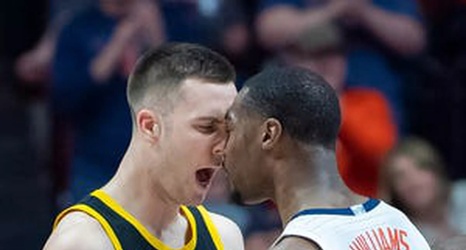 Life as a coach’s kid isn’t always the easiest. There will always be people who will say so-and-so shouldn’t be playing because he’s Fran’s/Kirk’s son. I guarantee you that Fran is tougher on Connor and Patrick than anyone else in the program. I also guarantee you that Connor has been screamed at by Fran for something Connor didn’t do. It’s often an easy “out” for a coach to heap the blame on his son/daughter.

A huge benefit of this father-son relationship is that Connor has developed one of highest basketball IQ’s I’ve ever seen. That’s not hyperbole. Connor McCaffery’s stats do not tell the complete story.