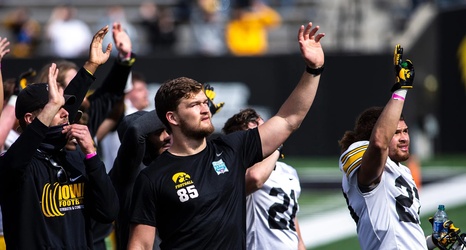 It will probably take another year before we’re seeing our two Hawkeyes sporting No. 85 seeing consistent action on the field. Until then, we’re looking at two guys who might sneak on the field, but will still be mostly spending time on the sideline come fall.

[Editor’s Note: HERE for the hot take on a couple guys already on the spring two-deeps being projected as having limited roles.]

Logan Lee seems poised for a shot at a starting position on the Iowa defensive line.