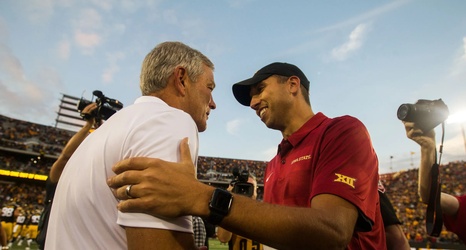 It’s that time of year again: I crack open my trusty laptop which still has Yahoo! as the default search engine and begin the football previews. Up next are the Iowa State Cyclones, a team currently led by a man who is winless against the Hawkeyes

What: Iowa’s in-state rivalry game in which they own a 46-22 record and six-game winning streak

Why: Because they are contractually obligated and it is also good for the state

2nd longest win streak: The six wins over seven seasons is tied for the second longest winning streak in the matchups’ history with only the Hawkeyes dominant stretch between 1983 & 1997 exceeding the current mark.