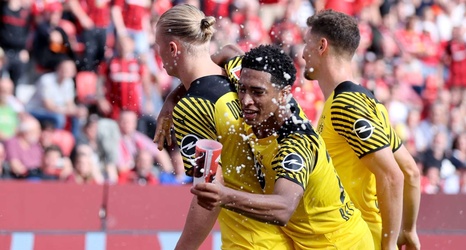 Borussia Dortmund star Jude Bellingham showed off a novel celebration involving a cup of beer during his side's gripping 4-3 victory over Bayer Leverkusen on Saturday.

A late penalty from Erling Haaland helped the visitors prevail in a match which saw them come back from behind on three occasions before finally sealing the win.

But their young England star also shared the headlines for his "first beer" and earned some scorn from his own organisation for the antics.