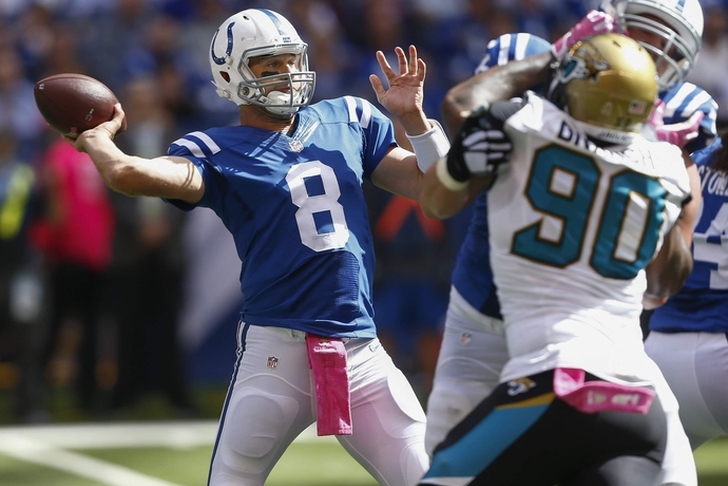 The 2-2 Indianapolis Colts travel to face the 1-3 Houston Texans in an AFC South matchup. It's an early season game, but it has serious implications for the division. So who will pick up an important win tonight? Here's our preview and prediction.

This game opened as a pick 'em, but the line has been betted down with the news that Andrew Luck won't play.

For a Week 5 game, this contest is important. The Colts are in danger of falling to 2-3 in a weak AFC South. A win would give the Texans a 2-3 record, but a loss would put them two games back. Both teams have issues on offense and neither team has won a game against a team with a record better than 1-3. This game will go a long way in determining who is in the driver's seat for the AFC South.

Which team gets steady QB play? The Texans pulled Ryan Mallett last week and he's barely completed 50 percent of his passes this season. Andrew Luck is out again this week, meaning Matt Hasselbeck will get the start. Neither QB is good enough to carry his team, so their jobs will be to limit mistakes and take advantage of opportunities.

What They're Saying About The Houston Texans:

Cecil Shorts and Nate Washington Out

This Is A Must-Win For The Colts

Call me crazy, but I think the Colts will win without Luck. I don't trust Ryan Mallett or the Texans offense and I think Hasselbeck will avoid mistakes. Frank Gore will carry the offense enough to pick up a win, while Arian Foster continues to struggle in his return.