Victor Oladipo is a Dolphins fan now; he was a Colts fan at one point 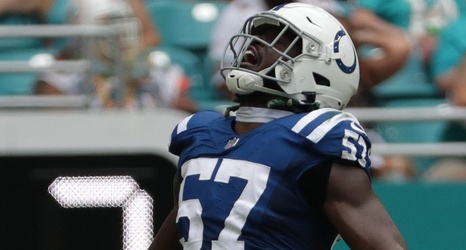 There's no doubting Victor Oladipo cheers for his hometown NFL team. Of course, his hometown team changes a lot.

The Miami Heat wing showed his love for the Miami Dolphins in Sunday's game against the Indianapolis Colts.

Of course, it wasn't too long ago he was a Colts fan. He was a member of the Indiana Pacers for more than three years before being traded to Houston last season. The Rockets traded him to the Heat and he re-signed with Miami in free agency.

Oladipo has also been with the Orlando Magic and Oklahoma City Thunder, so he's had plenty of options for NFL fandom.