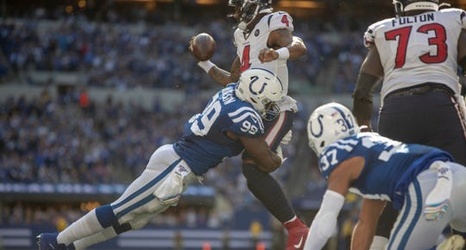 INDIANAPOLIS — Frank Reich didn't know much about Justin Houston when the Colts signed the veteran pass-rusher this past March. Just about the only thing the coach did know was how much Houston loved to harass quarterbacks.

Of that, he had first-hand knowledge.

Five years later, Reich can recall with excruciating detail the day he was personally tormented by Justin Houston. Back then, Reich was the offensive coordinator of the Chargers, still a couple of jobs away from taking over the Colts.

It was the final game of the 2014 season that Reich remembers so clearly.