Colts WR rocking No. 12 has clear explanation for why it happened 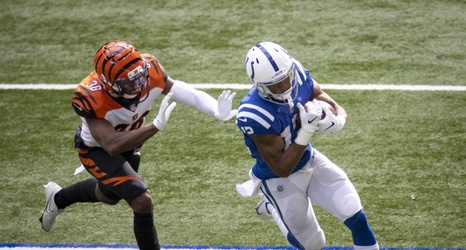 INDIANAPOLIS, IN - OCTOBER 18: DeMichael Harris #12 of the Indianapolis Colts makes a catch for a first down during the third quarter of the game against the Cincinnati Bengals at Lucas Oil Stadium on October 18, 2020 in Indianapolis, Indiana. (Photo by Bobby Ellis/Getty Images)

Colts WR DeMichael Harris had a perfect explanation for rocking the No. 12 jersey on Sunday against Cincinnati.

Most players who earn their NFL debuts are met with acclamation and ovations from fans and the media after the game. Unfortunately for Colts rookie wide receiver DeMichael Harris, however, that was anything but the case following the team’s comeback victory over Cincinnati on Sunday.