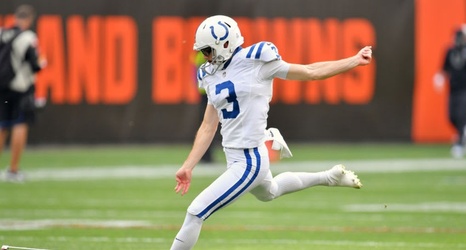 CLEVELAND, OHIO - OCTOBER 11: Kicker Rodrigo Blankenship #3 of the Indianapolis Colts warms up prior to the game against the Cleveland Browns at FirstEnergy Stadium on October 11, 2020 in Cleveland, Ohio. The Browns defeated the Colts 32-23. (Photo by Jason Miller/Getty Images)

The importance of flaunting a sound special teams unit is often overlooked in today’s NFL, when scoring touchdowns take precedent and going for it on fourth down is growing in popularity. Don’t tell that to the Indianapolis Colts, however, because punter Rigoberto Sanchez and kicker Rodrigo Blankenship form one of the best tandems in the league.