Colts: Rodrigo Blankenship has outscored Indy’s opponents by himself during streak 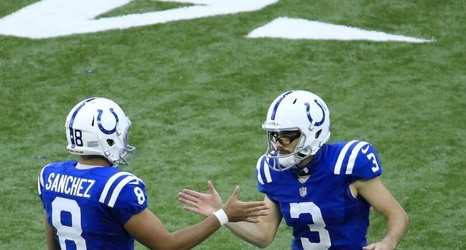 INDIANAPOLIS, INDIANA - SEPTEMBER 20: Rodrigo Blankenship #3 of the Indianapolis Colts celebrates with Rigoberto Sanchez #8 after making a field goal in the game against the Minnesota Vikings at Lucas Oil Stadium on September 20, 2020 in Indianapolis, Indiana. (Photo by Andy Lyons/Getty Images)

The disconcerting vibes stemming from the Colts’ humbling Week 1 loss to Jacksonville are long gone, as head coach Frank Reich’s side has responded to the public evisceration by rattling off three consecutive (and dominant) victories.

Their latest came in the form of a 19-11 win over Chicago on Sunday and the final score doesn’t properly articulate how significant of a mismatch it was.