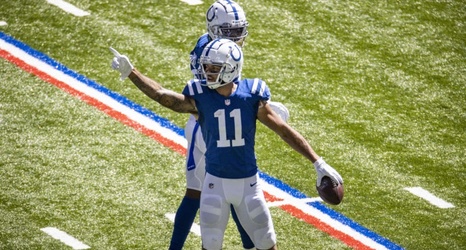 Michael Pittman #11 of the Indianapolis Colts points downfield after a catch for a first down during the second quarter against the Minnesota Vikings at Lucas Oil Stadium on September 20, 2020 in Indianapolis, Indiana. (Photo by Bobby Ellis/Getty Images)

Colts WR Michael Pittman Jr.’s return for the team’s daunting November slate will be massive for the passing game.

The Indianapolis Colts haven’t delivered a complete performance in almost a month, so all eyes will be on head coach Frank Reich on Sunday against Detroit to see how the team responds following their bye.

That, however, will be easier said than done, as the Lions are quietly one game out of a playoff spot in the loaded NFC.