Colts: It took way too long for Indy to cut ties with Chad Kelly 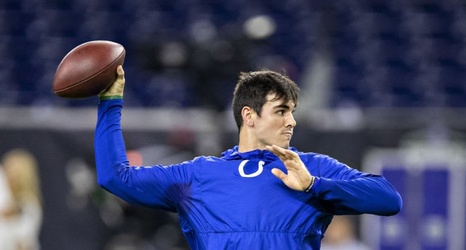 Chad Kelly #6 of the Indianapolis Colts warms up before a game against the Houston Texans at NRG Stadium on November 21, 2019 in Houston, Texas. The Texans defeated the Colts 20-17. (Photo by Wesley Hitt/Getty Images)

The Colts released QB Chad Kelly on Wednesday and we have zero idea why it took this long.

There’s a ton of ambiguity surrounding the Indianapolis Colts’ quarterback situation beyond the current season, as the likes of Philip Rivers and Jacoby Brissett, the two top guys on the depth chart, are both slated to become free agents.

With no real long term answers available this past offseason, the former was mostly signed as a bridge option who might be able to lead the Colts to a deep playoff run.