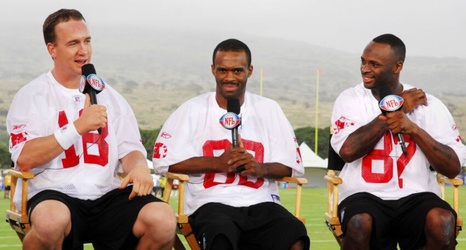 Peyton Manning, Marvin Harrison and Reggie Wayne of the Indianapolis Colts are interviewed by the NFL Network during NFL Pro Bowl AFC Practice at the Ihilani Resort in Kapolei, H, February 7, 2007 (Photo by Kirby Lee/Getty Images)

The Indianapolis Colts once boasted one of the best wide receiver duos in NFL history, though Reggie Wayne is still waiting to be inducted into the Pro Football Hall of Fame.

The other member of that duo, Marvin Harrison, was one of the clear best wideouts of his generation and registered eight straight seasons of at least 1,100 receiving yards.