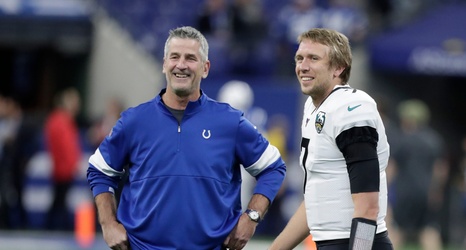 INDIANAPOLIS — The Colts haven’t ruled out the possibility of bringing in a veteran quarterback to back up Matt Ryan, according to Indianapolis head coach Frank Reich.

The Colts also aren’t going to rush the process of roster building at any point this offseason, even with an obvious fit for that role available on the market in the form of Nick Foles, the quarterback Reich helped lead to a Super Bowl win in Philadelphia.

Reich was asked specifically about Foles at Friday’s rookie minicamp.

“(General manager) Chris (Ballard) and I, you know how we roll,” Reich said.