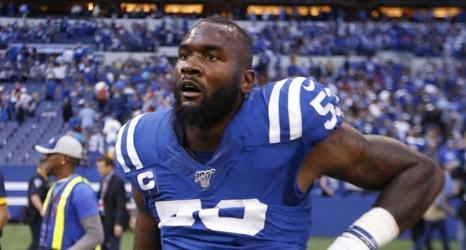 INDIANAPOLIS, INDIANA - OCTOBER 20: Darius Leonard #53 of the Indianapolis Colts on the field after the game against the Houston Texans at Lucas Oil Stadium on October 20, 2019 in Indianapolis, Indiana. (Photo by Justin Casterline/Getty Images)

Remember how concerned fans in Indianapolis were heading into Week 5 after the Colts released their lengthy injury report?

Though it didn’t ultimately prove to be their downfall — that lied squarely on the shoulders of quarterback Philip Rivers — the mismatches created by the absences of left tackle Anthony Castonzo and linebacker Darius Leonard undoubtedly made a difference against a Browns team that has a stout defensive line and dominant rushing attack.