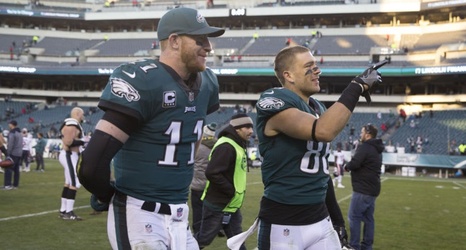 PHILADELPHIA, PA - NOVEMBER 26: Carson Wentz #11 and Zach Ertz #86 of the Philadelphia Eagles walk off the field after the game against the Chicago Bears at Lincoln Financial Field on November 26, 2017 in Philadelphia, Pennsylvania. (Photo by Mitchell Leff/Getty Images)

The Indianapolis Colts have done nothing in free agency to improve their offensive personnel since they traded for Carson Wentz early in the offseason, which is pretty shocking given how much he struggled under center last campaign.

Despite being linked with a myriad of in-demand receivers and left tackles, including speedster Will Fuller and ageless veteran Trent Williams, the front office has maddeningly played the hesitation card and let these players sign elsewhere.