Colts are about to start having real home field advantage 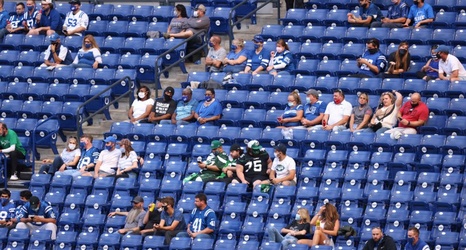 INDIANAPOLIS, INDIANA - SEPTEMBER 27: Fans sit in the stands during the game between the Indianapolis Colts and the New York Jets at Lucas Oil Stadium on September 27, 2020 in Indianapolis, Indiana. (Photo by Justin Casterline/Getty Images)

The Indianapolis Colts will be on the road this week against the Chicago Bears and then again in Week 5 against the Cleveland Browns, but when they return home on Oct. 18 to face the Cincinnati Bengals, they’ll be welcomed by a crowd over five times the size they saw in Week 2.