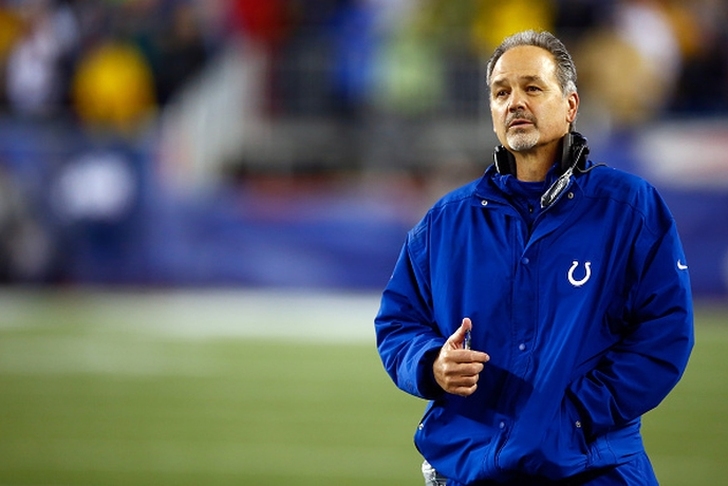 The Indianapolis Colts have had a rocky 3-4 start to the season, one that has fallen well short of the team's preseason Super Bowl expectations to this point. Those struggles have brought head coach Chuck Pagano's job security into question, but his job might not be the only one in jeopardy.

According to Jason La Canfora of CBS Sports, Colts owner Jim Irsay is planning to make changes to the coaching staff during their Week 10 bye:

Owner Jim Irsay has grown increasingly frustrated with the Colts' dismal season, and the regression of franchise quarterback Andrew Luck, in particular, and is considering staff changes in-season should the team not pull out of its funk, according to league sources. The Colts face two unbeaten teams the next two weeks -- Carolina and Denver -- before their bye, and it would come as no surprise to members of the coaching staff and front office if Irsay begins a shake-up then.

Coach Chuck Pagano came into the season expecting this to be his final year in Indianapolis -- as chronicled in depth prior to Week 1 -- and general manager Ryan Grigson's future is also in doubt, despite his strong ties to ownership, as the Colts have had few discernible strengths this season and have been getting outclassed whenever having to play outside the weak AFC South.

Offensive coordinator Pep Hamilton is under duress as well, with Luck's struggles at the core of the team's crisis, and a change of coordinators is under consideration as well, sources said, with associate head coach Rob Chudzinski -- who was Pagano's preference as offensive coordinator all along -- and long-time Colts staffer Clyde Christensen likely replacements (given Pagano's tenuous position, Christensen would likely hold more attraction to the owner in this instance).

Indianapolis is 3-0 against their division this season, but are 0-4 outside of it.

They will face the Carolina Panthers tomorrow on Monday Night Football.