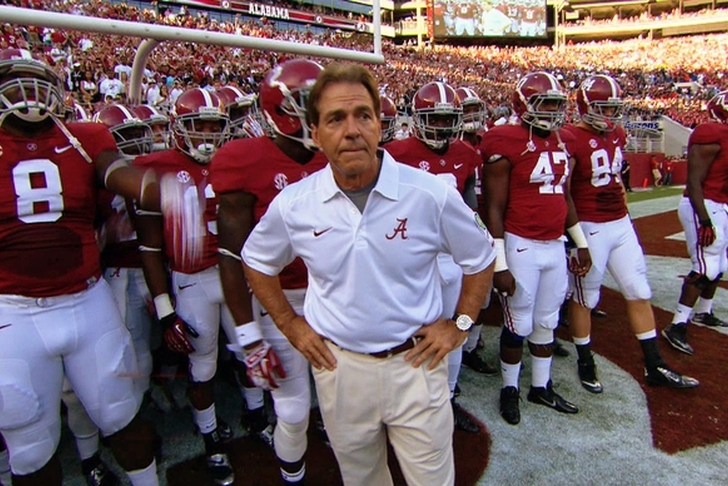 The tenuous relationship between Indianapolis Colts head coach Chuck Pagano and team GM Ryan Grigson has been well documented, as have rumors that it'll take nothing short of a Super Bowl championship for Pagano to be retained past the 2015 NFL season.

Obviously the partnership between Grigson and Pagano is at least strained, according to multiple sources both from within the organization and with first-hand access to their interactions. Throw into the equation the fact that owner Jim Irsay was only willing to play ball with a one-year extension for Pagano this offseason, and Indianapolis' 4-5 start appears to be the precursor to the end of Pagano's stay with the organization.

NFL Media's Albert Breer suggested a few months ago that Irsay will go "big-game hunting" during his next coaching search. If that's the case, is there any bigger game on the football coaching scene than Alabama Crimson Tide head coach Nick Saban?

WTHR's Bob Kravitz recently sat down with Adam Schein on a podcast, breaking down the shaky relationship dynamic between Pagano, Grigson and Irsay. Kravitz acknowledged that Pagano's on extremely thin ice, but also posited that Grigson might be too -- especially if Irsay can wrangle someone like Saban with a promise of full power over football operations.

"I think it's a 50/50 proposition," Kravitz said. "Early in the year, I was told that Grigson was Irsay's guy. But if you're Jim Irsay, you've got to look at all the money you've invested in free agents and how few of them have really panned out. Now the guys that have really panned out are the guys you didn't spend a lot of money on like Mike Adams and Dwight Lowery, people like that.

Kravitz did make sure to clarify that he hasn't heard anything concrete which connects Saban to Irsay or the Colts, but he's close enough to the Indianapolis owner to have a solid understanding of his business approach and thought processes.

"Well I think that, you know, look: Jim Irsay is willing to pay the money," Kravitz said. "He's been willing to pay the money on players. I have no question in my mind that he's willing to spend mega-millions on a head coach. Look, if they could give Nick Saban full power - and I fully believe that they are willing to do that - I see no reason why Nick Saban wouldn't, because when you more or less fail at a job, you want so badly to get back in the game. He failed in Miami for various reasons, the biggest one being that he didn't have full power. He wanted Drew Brees and he was told he had to take Dante Culpepper. If he had taken Drew Brees, he might still be in the league. So I think if they could offer him full power, and I think that they would be willing to do that, I could see him coming back in a heartbeat."

Saban compiled a 15-17 record over two seasons as head coach of the Miami Dolphins (2005-06), and has been connected in passing to a litany of NFL jobs in the past. So, it's best to take this all with a grain of salt. However, it's worth noting that the Colts reportedly were going after Saban as far back as 1998 and that the allure of coaching QB Andrew Luck in his prime (along with full power) may be tempting enough to pry him away from the modern dynasty he's created in Tuscaloosa.