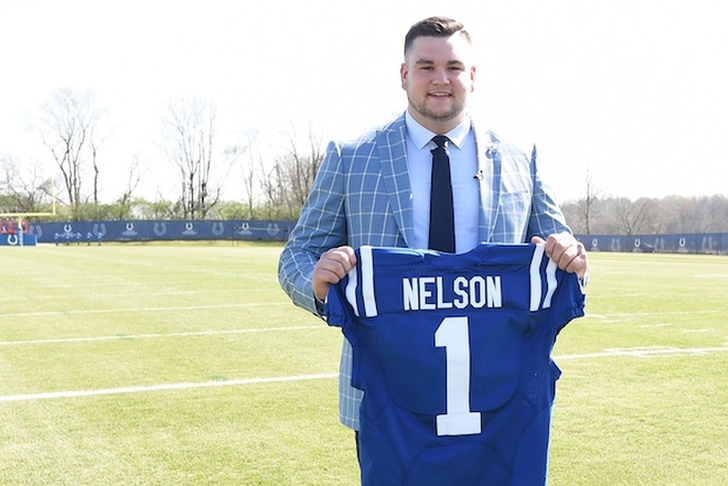 USA Today
Grade: C-
Breakdown: "GM Chris Ballard snagged three second rounders from the Jets (two in this draft) to move down three spots. He still got the player, Notre Dame G Quenton Nelson, who might have been pick had Indy stayed put. Perfect choice. However, those Round 2 picks ... OLB Darius Leonard, G Braden Smith, pass rusher Kemoko Turay and DE Tyquan Lewis — all felt like possible reaches for a roster that can't afford more misses."

ESPN
Grade: B+
Breakdown: "The Colts had a nice combination of additions in this draft: they got stronger up front on offense, added some upside and immediate depth on defense, and they got some potential playmakers in the run game. In two of those three, I would say the biggest beneficiary could be Andrew Luck, who is coming back from a shoulder injury and recovery that will have us all watching him closely in 2018.

"One way to protect Luck is to let him hand the ball off more often with better results. If this offense can operate more out of second-and-5 and third-and-2 scenarios, you're allowing Luck to get the ball out faster. Quenton Nelson (pick 6) can help get you to second-and-5. He's a devastating blocker, and a plug-and-play guard. Maybe a Pro Bowl version. Braden Smith (pick 37) is also a tough guy up front and could factor in soon. Nyheim Hines (pick 104) and Jordan Wilkins (pick 169) are a good mix of explosiveness and production. That backfield got better. Turay has pass-rushing upside and a quick first step, and Tyquan Lewis (pick 65) is a dependable edge player, though he's not going to blow anyone away with quickness.

"Deon Cain (pick 185) could provide some dividends at wide receiver. He comes from a system that has churned them out. Overall, it's a solid draft for GM Chris Ballard and Indy, which added picks via trade and provided some cover for Luck."

Bleacher Report
Grade: B
Breakdown: "After moving back from the third overall pick to the sixth overall pick, the Indianapolis Colts were still able to land arguably the best player in the draft in guard Quenton Nelson. Nelson is a mauler, and pairing him with second-rounder Braden Smith creates a fantastic interior line with former first-round pick Ryan Kelly at center. Prioritizing the line will benefit whichever quarterback plays in 2018 and the running back combination of Marlon Mack and fourth-round pick Nyheim Hines.

"Since the Colts had essentially two free second-round picks from their trade down, taking a flier on athletic marvels Darius Leonard and Kemoko Turay could alter the direction of the defense if they pan out. Neither is refined or ready to be impactful rookies, but both have uncommon traits that could blossom over the next few years. Former Ohio State defensive lineman Tyquan Lewis is more of a sure thing, as he was a quality starter on a loaded defense for several years.

"Adding wide receiver Deon Cain and Hines should give the offensive unit two immediate role players. Cain may start due to the lack of competition on the roster, as he's a devastating deep threat. Hines is in the mold of recent undersized but shifty playmakers like Tarik Cohen and Tyreek Hill."

SB Nation
Grade: B
Breakdown: "The single best pick of the entire draft may have been the Colts taking Notre Dame guard Quenton Nelson with the sixth overall pick. This draft had to be about keeping Andrew Luck healthy, and Nelson is a player who can keep the pocket clean.

"In the second round, the Colts found the perfect Tampa-2 linebacker in Darius Leonard of South Carolina State. He’s an athletic off-ball linebacker with has range. The 36th pick was a little early for Leonard, but he’s a perfect system fit. The Colts followed that up immediately with the 37th pick by taking another guard in Auburn’s Braden Smith. Having Smith and Nelson should tell you what the Colts want to do on offense this season.

"The 52nd pick was used on high-upside pass rusher Kemoko Turay of Rutgers. In Indianapolis, he’ll often play with his hand down, and then they took another edge player in Ohio State’s Tyquan Lewis. The Colts needed to get 4-3 ends, and now they have them in Turay and Lewis. The Colts obviously did work in the second round, but did they get good value?

"On the third day of the draft the Colts got good skill position players in running back Nyheim Hines of North Carolina State and Clemson wide receiver Deon Cain. Both should make the roster and get the ball."

Yahoo Sports
Grade: B
Breakdown: "The safest player in the draft was probably guard Quenton Nelson. And he helps a Colts line that has had major holes for years. The Colts had four second-round picks, and they loaded up in the defensive front seven: linebacker Darius Leonard, a very productive player at South Carolina State, and pass rushers Kemoko Turay and Tyquan Lewis. The other second-round pick, Braden Smith, was another guard and probably a reach with many good running backs on the board. N.C. State running back Nyheim Hines is a fun player but not the every-down back the Colts need, though Indianapolis also took a shot on running back Jordan Wilkins in the fifth. Maybe it would have been better to invest in one good back early instead of a second guard. The Colts also took two receivers in the fifth and sixth rounds including Deon Cain, who unexpectedly slipped."

Sports Illustrated
Grade: C-
Breakdown: "It’s hard to fault a team for drafting offensive linemen when its superstar quarterback is trying to get healthy. And yes, some will argue that guard Quenton Nelson is a generational type talent worth taking regardless of need. But instead of tapping Nelson at No. 6 and Braden Smith in the second round, the Colts could have aided their existing O-line (which is not great, but not the dumpster fire people think) by installing a quicker-strike passing game—something Andrew Luck will ultimately need to stay healthy. Luck’s ability to extend plays within the pocket is special, but that can no longer be his foundation.

"We only say this because the defense entered the draft three or four players away from even being in dire straits. Its only true three-down players were safety Malik Hooker and corner Quincy Wilson—and both have played just half a rookie season in the NFL. Every other player, save for maybe edge men Jabaal Sheard and John Simon if we’re being generous, was a situational piece. And with most of the lineup built for Chuck Pagano’s scheme, not new coordinator Matt Eberflus’s, it’s hard to envision many situations where those guys would work.

"Ultimately, Colts GM Chris Ballard found three defenders in the first two rounds, but let’s be honest—it needed to be four, at the very least. As it stands, the Colts must score over 30 points each week to even have a chance. But maybe this is all part of what would have been an ugly rebuilding process anyway. Ballard’s argument is this: nothing we do matters if we can’t protect Luck. By drafting new guards, we also move Jack Mewhort, which potentially upgrades three positions up front."