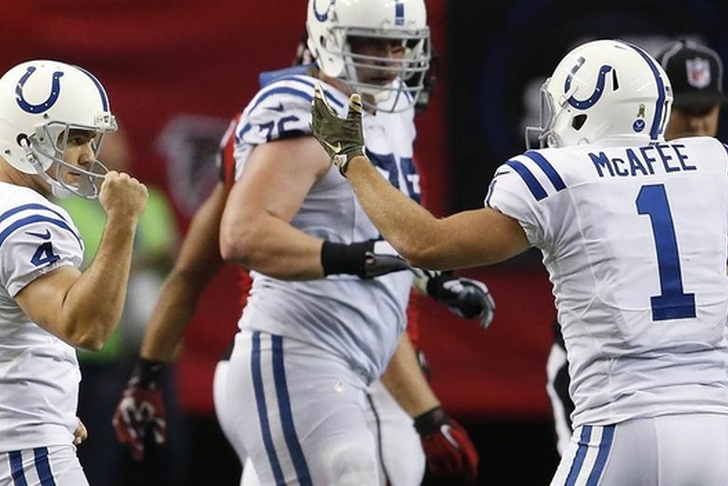 The Indianapolis Colts won their second straight game, beating the Atlanta Falcons 24-21. The loss is the Falcons' third straight and they are now 6-4. Without Andrew Luck, the Colts found a way to improve to 5-5. Here's what you need to know from the Colts' win.

Matt Hasselbeck wasn't great, but he was good enough for the Colts to win. He completed 23 of 32 for 213 yards, two TDs and two picks. His job his to hold down the fort until Andrew Luck returns and he did that against the Falcons.

T.Y. Hilton was invisible against the Falcons. He was targeted just four times, catching two passes against 21 yards. He's had a rough few weeks with matchups, but he needs to do better.

Turnovers killed Matt Ryan. He completed 25 of 46 passes for 280 yards and three TDs, but was picked off three times. Those picks cost the Falcons a win.

Devonta Freeman left the game with a concussion and the Falcons' running game was the same with Tevin Coleman at RB. Freeman busted a 39-yard run during the game and finished with 43 yards on three carries. Coleman picked up 48 yards on 17 carries.

"The guy is wearing Depends and he's just knocking down game-winners every week. It's incredible to watch. I'm lucky to be teammates with that guy." - Colts punter Pat McAfee on kicker Adam Vinatieri.

"I don't ever think you get totally used to it. But the excitement is always there." - Vinatieri.

"We haven't finished a game in about a month. We've got to find a way to finish one of them." - Falcons WR Roddy White.

"It's tough. Devonta's been such a big part of what we've done this season." - Ryan.

Perhaps the Falcons aren't as good as we thought they were early this season. Atlanta has dropped three of its last four, with the lone win coming over a bad Titans team. The Falcons were on the path for a playoff berth, but they need to starting winning and quickly. A game against the Bucs in two weeks is going to have serious implications.

The Colts defense deserves much of the credit for the win. They forced four turnovers and held the Falcons to just 21 points. They even added a defensive touchdown that was incredibly important in the win. The Colts' haven't had a great defense this season, but it stepped up today.