The Best and Worst Case Scenarios for the Indianapolis Colts 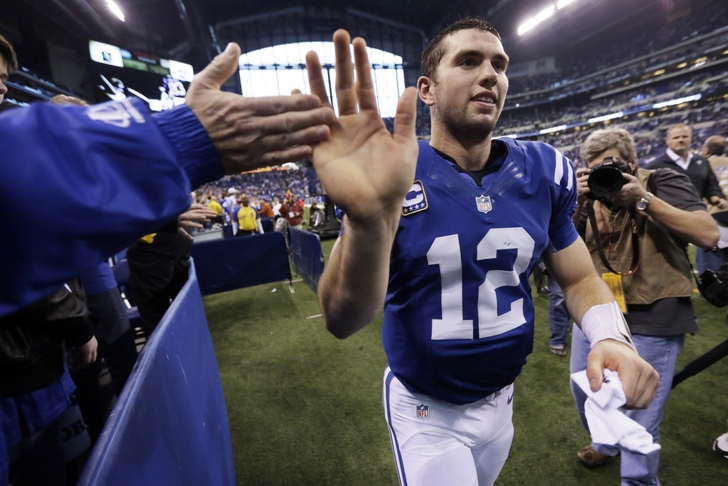 The NFL season has hit the homestretch. It is nearing the end of the tunnel of the regular season, the top of the 9th inning. However you prefer to say it, there are four weeks left to determine the playoff field in a league with a great many contenders in the hunt for the Lombardi Trophy.

Last Sunday, the Colts pulled off a not-quite-dominant-but-possibly-convincing-enough win over their closest pursuer in the league’s weakest division of the AFC South. Closest being a relative term in this sense; really they were about a marathon’s distance from the Colts, but because they were in second place, the Colts have sprinted away following their 22-15 victory and all but clinched the division.

Hurrah! A division clinch, one of the first teams to qualify for the playoffs, where they so rightly belong! Isn’t that right? Well…that is something the Colts still have to figure out. After all, they owe much to the dispirited football the other three teams in the South have been playing virtually all year. After being blown out by the Rams and Cardinals in recent weeks, Indianapolis seems like they still have some identity-forming of their own as the temperatures get colder and the playoffs loom.

As the Colts enter their final slate of games – in which they play at playoff contender Cincinnati, against the hideously bad Texans, at the was-hot-now-cold Chiefs, and against perennial AFC basement dweller Jacksonville – perhaps the thing Colts fans may expect to happen is that Indy continues their post-bye trend of alternating wins and losses, ultimately finishing with a record of 10-6 and a spot in the playoffs.

With that in mind, we present the best and worst case scenarios for the rest of the Colts’ season, including the playoffs, which is just about the surest thing this squad has at this point – playing in January thanks to a strong early part of the season and the advantage of playing three of the league's weakest teams six times a year.

In other words, he needs to stop avoiding balls like beehives and start seeing them as being layered with glue. He doesn’t have to turn into Megatron, but the Colts offense can’t be successful with only one productive wide receiver.

The running game isn’t dominant, but it’s been productive. Richardson, now as a backup most likely for the rest of the season, won’t have many chances to redeem himself for his lack of physical power-running the Colts expected, but that’s okay because Donald Brown is in the house. Brown is easily capable of going 100 yards a game, and can do that in a best-case scenario for Indy. His impact late in games, such as last Sunday against the Titans, will prove to be vital as the Colts finally are able to successfully implement the running game that OC Pep Hamilton boasts about delivering. A productive running game headed by the young Brown helps Luck’s offense score in multiple ways.

And even though Richardson's production may have underwhelmed thus far, he still has about as much room to improve in his game as any young offensive player.

After a talk with Trent Richardson today, I will say his head is def in the right place. Has great perspective on his situation

As for Luck himself, he will resemble the young quarterback who threw for a rookie-record 433 yards last season. He will continue to do a good job spreading the ball around, and a rejuvenate DHB will give him another weapon as he passes for 300 yards in three out of the remaining four games on the schedule.

On defense, Cassius Vaughn continues to pick off opposing quarterbacks, and Robert Mathis bests Michael Strahan’s NFL sacks record. Daniel Adongo will prove to be as much of an impactful player as he was playing rugby, which is virtually the same sport sans any kind of pads. The Colts defense makes a statement in holding Andy Dalton to under 150 yards and is primed for the playoffs.

In a best-case scenario which is entirely possible, the Colts find the passion they had in the beginning of the season, winning 3 out of their last 4. However, playing with passion isn’t always enough in the league, and the Colts will be ousted in a divisional playoff game against a foe with more talent and experience in the playoffs, maybe New England or Denver.

Among the worst things the Colts can do this December is continue their downward spiral that began after their bye week. Make no mistake that the Colts WILL win the AFC South – it’s how they win it that will determine their level of play in January. A complete collapse would be brought about by the Colts’ inability to live up to the WIN NOW mantra that Jim Irsay instilled in them way back after they beat unbeatable Denver.

That probably seems so far away now, even to the Colts faithful.

Andrew Luck throws six interception in his remaining four games and only passes for more than 200 yards once as Pep Hamilton is outed before the end of the season. He is unable to achieve the chemistry with his coordinators or weapons that is oh so necessary when it comes time for playing big or going home.

Luck’s receivers fail to improve as they continue to be unable to put together huge plays a la the Saints or Lions offense. Or the Colts offense of old. They are limited to six points when they play the Chiefs.

Donald Brown remains the most productive back…productive but not effective. He currently has 378 yards on the season – he finishes with 500. The upper echelon of the Indianapolis Colts organization find themselves with a glaring weakness once their season ends early – Brown will be a free agent and they can’t afford Richardson not improving in the offseason.

A weakened defense, lacking all will, continues to allow touchdowns, touchdowns, and more touchdowns en route to the playoffs. Mathis fails to reach 20 sacks on the season and makes people wonder how on earth he was once a legitimate Defensive Player of the Year candidate.

Once again, Colts fans can breathe (somewhat) easy knowing their team will be in the playoffs for a second straight year…but once again it will be another early exit. WIN NOW will have to wait another year.