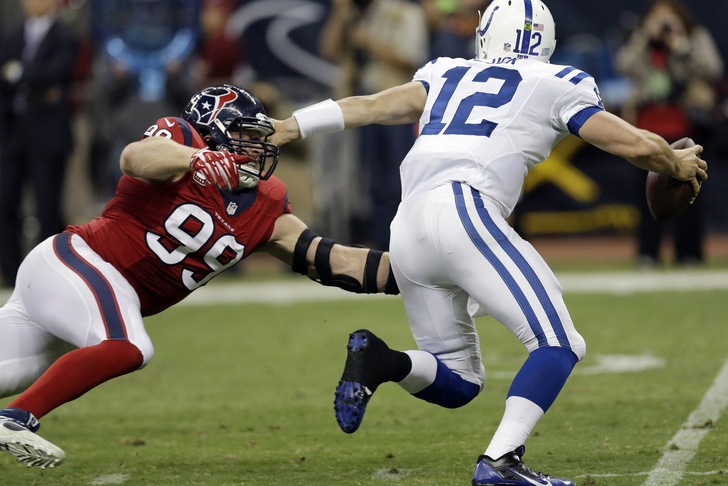 Indianapolis came out swinging, leading 24-0 after the first quarter. Houston looked dead in the water, but rode the legs of running back Arian Foster to cut the lead to 27-14 at halftime.

The two teams traded touchdowns in the second half, but the Colts forced two 4th-quarter fumbles to hold off a late rally by Texans to come away with the close victory.

Turning Point: Houston was storming down the field late in the fourth quarter with intentions on taking the lead, but Andre Johnson fumbled on a long reception that the Colts were able to recover. Indy salted away most of the rest of the clock, holding on for the close win.

Key Stat: The Texans were able to capitalize on two Indianapolis turnovers, but their offense was terrible on third down. They were 1-8 on the day, which didn't let them score enough points to top the Colts.

Indianapolis MVP: T.Y. Hilton absolutely shredded Houston's secondary tonight. He hadn't caught a touchdown pass since last November, and that changed on a long pass in the third quarter. He finished with nine catches for a monstrous 223 yards and that touchdown.

Houston MVP: Is there anything J.J. Watt doesn't do? He was in Luck's face all night, knocking multiple passes down and recording two sacks, as well as returning a fumble 45-yards for a touchdown.

What’s Next? Indianapolis now has a leg up in the division race, which they'll look to extend between now and when these two squads meet again in Week 15. The Colts return home to face a 4-1 Cincinnati Bengals team next week, while the Texans will prepare for a Monday night showdown in Pittsburgh.