ColtsNation Is Behind You, Peyton 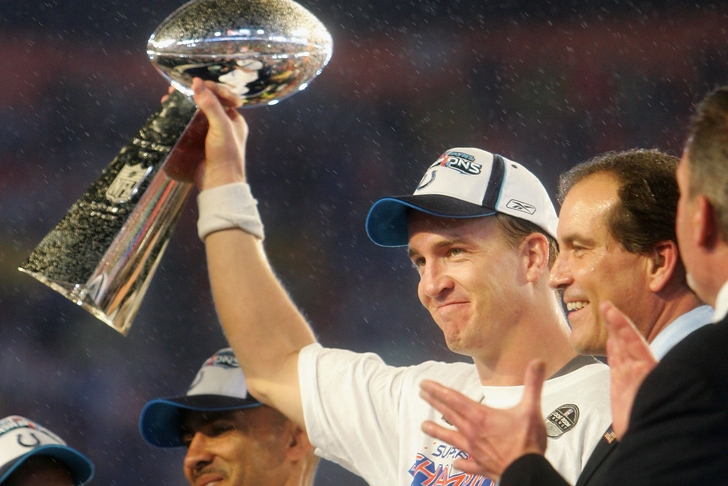 The loyal Indianapolis Colts devotee can easily describe what they were thinking and feeling after their team won Super Bowl XLI against the Chicago Bears. Most will bring up pride for sticking with a team relatively devoid of Super Bowl championships – save for the 1970 group in Baltimore – as well as elation for their city and team.

All would undoubtedly mention how overjoyed they were for Peyton Manning, resident superstar since 1998, for finally winning his first ring after years of playoff appearances ending too soon. The NFL world was already fully aware that we were watching one of the very best quarterbacks to play the game in #18. Indeed, if you ask any Hoosier, Manning is the very best, and to see him begin to cement his legacy as one of the fabled All-Timers of NFL lore was a sight to see for football fans everywhere (except for maybe The Windy City).

And that is why Indiana, and all who devote themselves to The Horseshoe, is behind you, Peyton. As Super Bowl XLVIII nears, you can bet you have the support of those who have followed you for so many years.

The ESPN-ers have been discussing a great deal about how the cold weather and wind might affect your play. I’m sure it won’t have any impact, as you have triumphed through any conceivable obstacle through your 13-year tenure in

Indianapolis. We don’t know how you – or any of 80,000+ fans – are going to endure the cold at MetLife Stadium. Thanks to you, we have beautiful Lucas Oil Stadium in downtown Indianapolis to keep us warm on particularly cold days, so we don’t have to worry about that.

Believe us when we say we have been following the Denver Broncos the last two seasons, in the hopes that you may one day return to playing football in February. Deep down, we never truly severed ties with you when you left Indy on that fateful day. A part of us kept rooting you on. We knew you wouldn’t let a bad neck slow you down. We knew better.

We, along with Denver, felt your pain when the Broncos fell to the eventual Super Bowl champion Ravens last postseason. We, along with Denver, knew the 2013 season was going to be special when you exacted revenge in this season’s blowout opener against the very same opponent. Seven touchdowns, 462 yards, and a newfound confidence among the orange-clad teammates you were leading? Vintage Peyton Manning. We knew that. We weren’t surprised.

Now, in addition to watching Andrew Luck lead this new version of the Colts, we had to try and catch Broncos games as well. Our Sunday schedules might have been a little awkward at times, but we wouldn’t have it any other way. It’s been an absolute pleasure continuing to watch you solve opposing defensive schemes, throwing touchdown passes, racking up yardage, victories, and NFL records a mere two years after everyone was casting you aside and saying you’ve run your course.

In 2011, we questioned whether Peyton Manning would ever play football again. In 2014, he's playing in the Super Bowl.

We knew better. Peyton Manning wouldn’t settle to retire when the media and conventional wisdom says he should.

The Colts owe you a thank you for helping us emerge victorious in the AFC South division when you defeated the Titans in Week 14. Somehow, fate made sure the two franchises you have been a part of benefitted from your play. It’s like you will

always be intertwined with Indy.

We felt your elation and the joy of the Denver faithful all the way in Indianapolis when you broke NFL records for single season touchdowns and yards, but we knew you weren’t done. You were on a mission to bring a championship back to a city which has been long absent from the Super Bowl. Just like the Colts franchise. You have the opportunity to become the first quarterback to do something truly legendary: Lead two cities to a Super Bowl victory.

We cheered you on and jumped for joy (for multiple reasons) when you defeated your rival Tom Brady and the Patriots, silencing your critics in the process. Your postgame remarks were both classy and one hundred percent the man we watched play for so long. In other words, you were you.

The lights and glamour of being a star player in America’s favorite sport didn’t change who you were to your core – a classy guy with a passion for studying and playing the game of football. Becoming one of the best quarterbacks in history in the process? For you, that always seemed simply like a perk. You never let it get to your head, and that is why we appreciate the Peyton Manning on the podium just as much as the Peyton Manning on the field.

Come February 2nd, half of America will cozy up on their sofas with soda, nachos, friends, and family. Many will be there for the ads, halftime show, or simply for the sake of tradition. Denver will be saying a few prayers as they ready to see you potentially bring the Lombardi Trophy back to Colorado for the first time since 1999. The 12th man in Seattle will be doing the same, hoping for Russell Wilson to help win the Seahawks’ first championship.

We in Indianapolis will also be rooting you on, hoping that you are able to put the finishing touches on a perfect season for you and for Denver. Some of us will be wearing jerseys with the number 12 on them. A lot of us will try our best to search for that blue and white No. 18 jersey that is never not worth sporting. That’s a promise.

We are united in yearning to see you win. We know the kind of selfless player and person you are, Peyton, and nothing would make us happier than seeing the quarterback who put Indiana on the NFL map hoist the Lombardi trophy once more.

Be sure to remember that next Sunday, Mr. Manning. You never truly left Indy. Your spirit still lingers in Lucas Oil Stadium, in the winning tradition you helped establish, and in the hearts of young Hoosiers you helped inspire.

Above all, remember that ColtsNation is behind you.