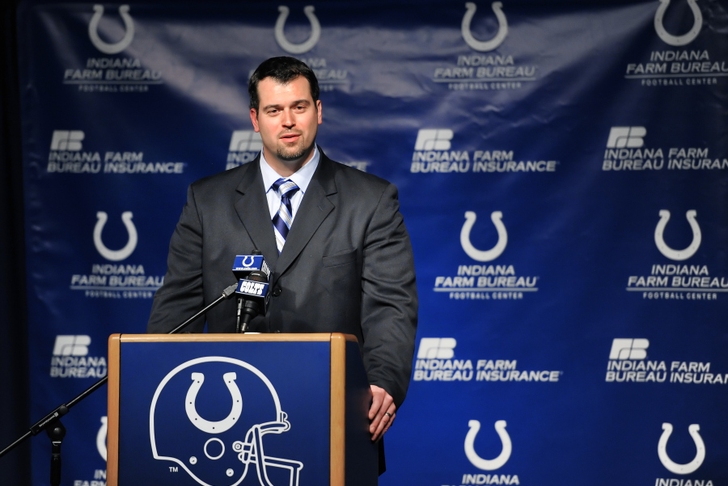 They say that champions are built through the draft. Well, Colts GM Ryan Grigson may disagree with that mantra. Already early into his third year, Grigson has been ultra-aggressive in free agency and in trades, sending away those "champion building draft picks" for role players in areas of need.

These moves have not quite yielded the results Grigson and the organization have expected. Last season, they paid big money for key defensive players like LaRon Landry, Greg Toler, Erik Walden, and Ricky Jean-Francois - who either underperformed (Walden, Jean-Francois) or spent significant time sidelined with injury (Landry, Toler). These moves, on top of the Trent Richardson trade - which many have criticized - made the 2013 season's acquisitions a major disappointment.

Coming into the 2014, the Colts had a big wallet (over $40 million in free cap space) and lots of needs. And now with Jared Allen officially signing with the Chicago Bears on Wednesday, let me officially declare the 2014 free agency craze over, and take a look at how the Colts spent their money... for better or worse.

To his credit, Grigson did strike gold before the 2012 campaign with the signing of CFL stud linebacker Jerrell Freeman, who has been a big play making and tackling machine. With the off-season departures of two middle linebackers, an inside presence to pair with Freeman was a key area. The Colts did just that with the signing of D'Qwell Jackson on a four-year, $22 million dollar contract. Jackson spent his first eight seasons in Cleveland recording over 800 tackles. Although his best days are behind him, he is still a great tackler, a leader in the locker room, and the Colts were able to get him at a reasonable price. The combination of Jackson and Freeman will give this defense a tough middle.

If you follow McAfee on twitter, you should know all to well what kind of a personality he is. This NFL funny man is not only a fan-favorite, but one of the league's best punters (and tacklers!). McAfee averages more than 45 yards per punt and his particularly adapt at pinning teams inside the 20 yard line. Now locked up on a new five-year deal, Pat "Boomstick" McAfee was one of the best moves the Colts made this season.

Adam Vinatieri has always been a quandary to me. On one hand, he is arguably the most clutch kicker in NFL history, winning two Super Bowls with the sweep of his leg. On the other, that leg is not getting any stronger and now fans hold their breath anytime he attempts a kick outside of 45 yards. Don't get me wrong, he is a great kicker and there was not a better option in free agency this season, but at 41 years old this will no doubt be his last contract.

Arthur Jones was part of Baltimore's Super Bowl run two seasons ago and also played under Colts coach Chuck Pagano when he served as defensive coordinator. Although listed as a defensive end, he is extremely versatile and it sounds like the Colts plan to use him in a variety of positions across the line. Although the Colts had more of a need at a true nose tackle, Jones will help bolster the line with Cory Redding and Jean-Francois. Who knows, maybe Jones can play the nose? Oh yeah, and his brother just happens to be UFC fighter Jon Jones... so you know kicking ass must run in the family.

With Toler facing injury most of the season, Vontae Davis was the Colts' primary and best option at cornerback last season. Although he faced some reduced play due to injury, keeping Davis had to have been at the top of Grigson's radar. Also due to the fact that the Colts gave up a second-round pick to get him from Miami, it would have been a major blow on multiple fronts if he had been let walk. Fortunately enough, both sides agreed to keep one of the best cover corners (when healthy) in town for a few more years.

This signing was the steal of the entire NFL free agency. Two years ago, Hakeem Nicks was considered by some to be the best young wide receiver in the league; strong hands, high vertical, break-away speed, and great concentration. His last two seasons, however, have been marred with injuries and inconsistency, resulting in his departure from New York. So why is this a good pick-up? The Colts only gave Nicks a one-year, $4 million "show me" contract. The Colts have done this the last two-years with Donnie Avery and Darrius Heyward Bey. With Reggie Wayne coming off a serious injury, questions loom as to how effective he will be going forward. If Nicks can come in and produce, the Colts will have first dibs on resigning him next season as Wayne's replacement and compliment to T.Y Hilton. If not, it is a relatively cheap short term investment. There is a lot of upside here.

Overall, this was a fairly productive free agency period. Unlike last year, the team did not drop big money on players that do not deserve it. They also took care of their own players, the only real exception being Antoine Bethea who took a deal with the 49ers. They were able to add depth to a couple key positions on the defense. The glaring problem with this class is the lack of concentration on the offensive line, which was definitely their weakest area. The Colts signed ex-Cowboy Phil Costa at center, but it is not a guarantee he will even start.