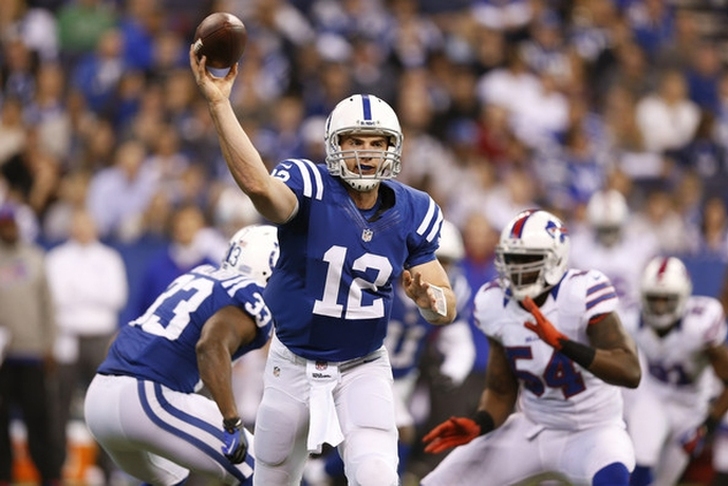 The Indianapolis Colts have Super Bowl expectations after making it to the AFC Championship Game last year, and their quest to do just that will start in Buffalo against the Bills on Sunday. Here are three reasons why the Colts will win that game:

The Colts employed a revolving door of offensive-line looks in 2014, but Indy appears to have a concrete first team in place with Castonzo, Mewhort, Holmes, and Herremans. Such continuity is going to be critical to Indianapolis getting maximum efficiency and pop out of their Death Star arsenal of offensive studs, especially against a Bills defensive front that is one of the best in the league. If they can limit the effectiveness of Buffalo's front seven, Indy will win this game easily.

The Colts brought in veterans CB Darius Butler, LB Trent Cole, and LB Nate Irving on the defensive side of the ball (among others), and those moves should really make a difference in improving a unit that has been one of the league's worst in recent years. That will be a big factor in shutting down's Buffalo's offense. QB Tyrod Taylor is making his first career start in this one, so the opportunity is there for the Colts to have success.

2015 just feels the year where Luck's ascent to superstardom meets Super Bowl glory. With former 49ers legend Frank Gore at his disposal in the running game and a couple of explosive new receiving targets in Andre Johnson and Phillip Dorsett, Luck has a full clip of ammunition to rain pinball-like scoring numbers on NFL defenses. He's arguably the best quarterback in the game right now, and he's the biggest reason why the Colts will win this game.