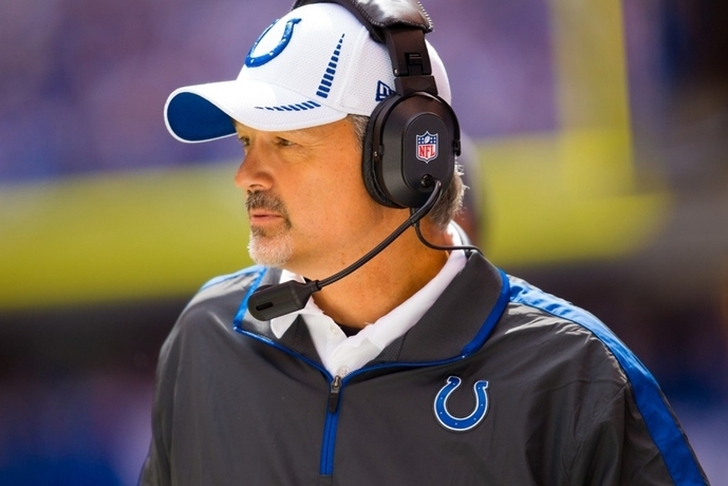 The Indianapolis Colts are 2-2, with close wins over AFC South rivals in the Jacksonville Jaguars and Tennessee Titans. While head coach Chuck Pagano's seat has cooled slightly by taking back the AFC South lead, that doesn't mean he's completely saved his job. Here are three reasons why 2015 could be Pagano's last in Indianapolis.

This is the biggest reason why Pagano might not be back next season. There have been several reports of a rift between head coach and GM. With Pagano in his final year, his issues with Grigson could result in the Colts not resigning Pagano after this season ends. The two don't always agree on personnel decisisons, and that's an issue that could spell the end of Pagano's time with the team. The GM often gets the final say in the team's head coach, something we saw with the San Francisco 49ers last season. Unless the Colts make a deep postseason run, Pagano might not be the team's head coach next season.

The Colts have already shuffled their offensive line once this season, but the team still has issues running the ball and protecting the quarterback. If the Colts don't get improved play from their offensive line, they are going to have a tough time making a deep postseason run. Without that, the Colts might decide to move on from Pagano.

The Colts have been plagued turnovers this season and have failed to force enough. The Colts are dead last in the NFL with a -9 turnover differential. They've forced just three turnovers and coughed the ball up 12 times. Andrew Luck has thrown far too many interceptions. He's tied for the NFL lead in INTs, with Jameis Winston. If the Colts don't hold onto the football, they might not make a playoff run and if they can't do that, then there's a good chance Pagano won't be the head coach next season.