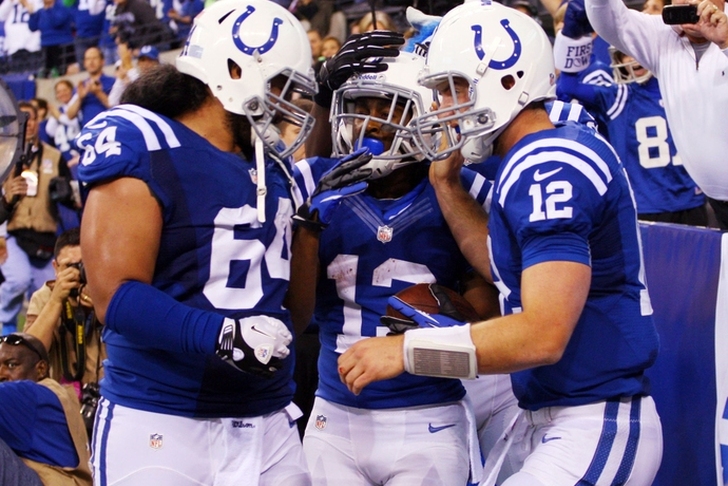 The Indianapolis Colts' success starts and ends with Andrew Luck. The young superstar has carried the Colts since he replaced Peyton Manning. Luck is a great fantasy QB, and the Colts have added a few new toys for him this season.

Luck was second to only Aaron Rodgers last year among fantasy QBs, and only just barely. I generally don't like spending a high pick on a QB, but Luck is an exception. If he's on the board towards the end of the third round, he's worth it.

Gore is 32, which is worrisome. Still, he finished 16th among tailbacks last season. There is some risk because of his age, but he's worth investing in as a low-end RB2.

Herron got a chance last year because of Ahmad Bradshaw's injuries and Trent Richardson's ineffectiveness. If something happens to Gore, Herron will likely become the starter. He's nothing more than a handcuff option for now.

Ballard played well in 2012, but missed the last two seasons with injuries. If something happens to Gore, he's worth monitoring.

Hilton established himself as Luck's top target last year. He finished 12th among fantasy WRs last year and should finish in the same range this year.

DeAndre Hopkins' emergence resulted in fewer targets for Johnson. He has a chance to return closer to his previous form in Indy. Luck is a massive upgrade over the QB situation in Houston. Draft Johnson as a Flex, while hoping he plays like a WR2.

Moncrief has the potential to be a great fantasy player. However, he's probably a year or two away from reaching that with Johnson in town. He might be worth taking as a late round flier.

Dorsett has the potential to be a deep threat, but needs some time to acclimate to the NFL.

Allen finished 13th among fantasy TEs last season, despite playing in only 12 games. He finished so high in large part to catching 8 TDs. He and Fleener will likely cut into each other's numbers and banking on TDs is dangerous.

With Allen missing time, Fleener stepped up in a big way. He only caught 51 passes, but eight were for scores. That's tough to replicate and Allen should be healthy this year. Both TEs worry me as potential fantasy starters.

Keep it here for all your Fantasy Football needs and Indianapolis Colts news.