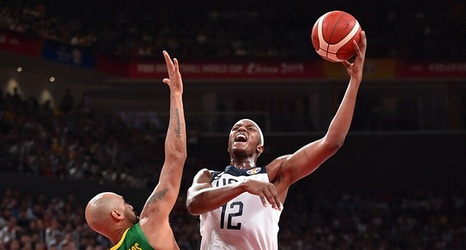 Myles Turner had his best game so far in the 2019 FIBA World Cup on Monday, scoring 16 points on 8-of-11 shooting and pulling down eight rebounds in the United States' 89-73 win over Brazil in Shenzhen.

Greece's win over the Czech Republic earlier on Monday officially advanced Team USA to the quarterfinals, but the victory over Brazil sealed first place in Group K. The Americans will face France on Wednesday at 7:00 AM ET.

Turner started at center and tallied six quick points on Monday, helping the United States jump out to an early 14-7 lead.