T.J. Warren was huge in the clutch, but so was Aaron Holiday 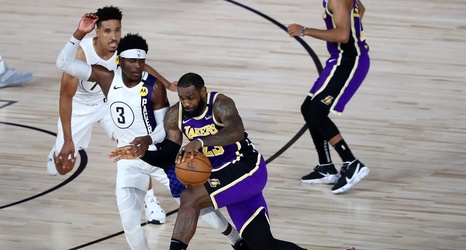 Scoring seven points in the final 1:25 to give the Pacers the lead for good in a 116-111 win over the Los Angeles Lakers, T.J. Warren continued to appear every bit as magical as the theme park where he is putting on his regularly scheduled fireworks shows. Squaring up Anthony Davis on the clear-out off an Iverson cut, the 26-year-old forward paused for approximately a nano-second to shift his weight before immediately attacking the basket and suspending himself in mid-air like a piece of living art to convert this shot with a bigger, X-shaped body doing the absolute most to setup a roadblock:

Thirty-five seconds later, the talk-of-the-bubble tried the same thing again; only this time, when he got knocked off his route (perhaps with the help of a push-off), he flowed directly into another isolation, and completely unbothered, skipped merrily down the lane for a soft, high-arching push-shot.