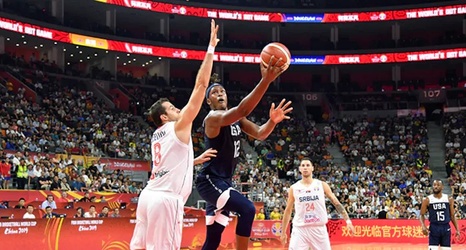 Heading into the 2019 FIBA World Cup, many experts predicted the United States and Serbia would meet in the championship game. Instead, they met on Thursday in the consolation bracket after unexpected quarterfinal exits.

Serbia got the better of the USA on Thursday in Dongguan, China, racing out to a 25-point lead after one quarter and holding on for a 94-89 victory.

Pacers center Myles Turner had 10 points on 4-of-8 shooting, five rebounds, and two blocks in the loss.

Turner actually scored the first two points of Thursday's contest off a dish from Kemba Walker, but that was one of only a handful of highlights for the Americans in the first quarter.