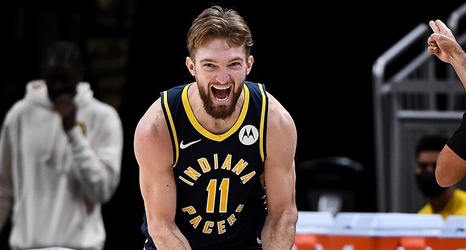 Age: 25
Years Pro: 5
Status: Signed through the 2023-24 season.
Key Stats: Started 62 games and averaged a career-high 20.3 points on 53.5 percent shooting. Ranked fourth in the NBA in rebounding, pulling down 12 per game, and led the Pacers in assists (6.7 per contest). Had a team-leading 48 double-doubles and a franchise-record nine triple-doubles.

Domantas Sabonis cemented his status as one of the NBA's most talented big men during the 2020-21 season. The son of Hall of Famer Arvydas Sabonis, the younger Sabonis is putting together an impressive resume of his own just five seasons into his professional career.