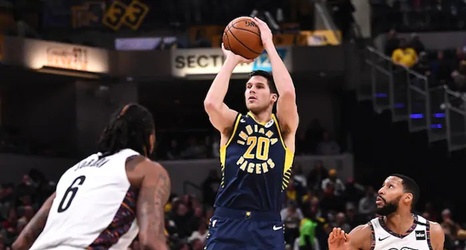 Looking to snap a five-game skid, the Pacers headed to halftime on Monday night at Bankers Life Fieldhouse trailing the Brooklyn Nets, 51-48.

The Pacers got off to a fast start offensively, connecting on seven of their first nine attempts. All-Star forward Domantas scored three buckets on the interior, Victor Oladipo added a midrange jumper and a 3-pointer, while Myles Turner drilled a corner three and convert a three-point play to give Indiana an early 17-15 lead.

But Brooklyn answered with a 13-4 run to move back in front. Indiana closed the frame with a 7-2 spurt, but still entered the second quarter trailing, 30-28.