Guy Back to Having to Prove Himself 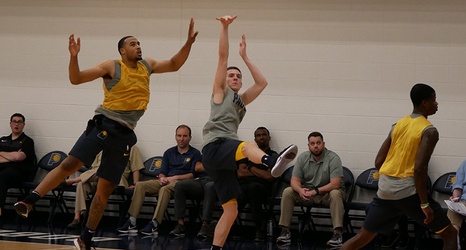 He looked like an intern recruited from the video staff to fill out a squad so a five-on-five game could be played. The lucky-to-be-there outcast who would be expected to stand in the corner and maybe, just maybe, get an occasional outlet pass for a shot.

"I don't pass very many eye tests," Kyle Guy said following his workout with the Pacers on Wednesday.

Give him credit for self-awareness, which is a good place to start in identifying the qualities that go into finding a roster spot in the NBA. He knows what he looks like, but he also knows what he can do, knows what he cannot do, and believes that will be enough to lift himself to the ultimate level of basketball.