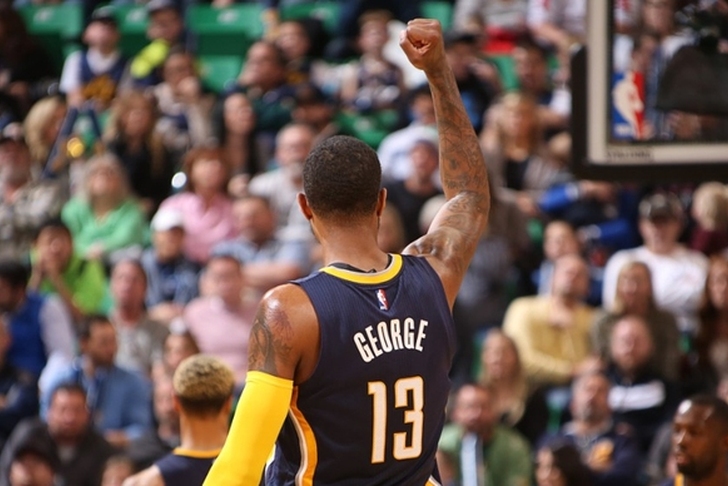 The first game of the 2016 NBA Playoffs is over. Game 1 of the Indiana Pacers vs. Toronto Raptors series was a hard fought contest, with the No. 7 seed Pacers upsetting the No. 2 seed Raptors 100-90. It is the seventh straight playoff loss for the Raptors.

The Raptors dominated the glass, out-rebounding the Pacers 52 to 37. Toronto had 20 offensive rebounds. However, the Pacers were the better shooting team, especially from beyond the arc. The Raptors hit just 4 of their 18 3-pointers, while the Pacers were 11 of 21.

Paul George led the way for the Pacers, putting up 33 points, four rebounds, six assists, four steals and two blocks. He was 12 of 22 from the field and 4 of 5 from beyond the arc. He went off in the third quarter, dropping 17 points.

Myles Turner had 10 points and four rebounds for the Pacers, but also added five blocks. Monta Ellis was the second leading-scorer with 15 points. Five different Indiana players had at least 10 points.

Jonas Valanciunas was a monster in the paint for the Raptors, before getting in foul trouble and eventually fouling out. He put up 12 points and an incredible 19 rebounds, 11 of which were on the offensive glass.

Kyle Lowry was held in check, putting up just 11 points on 3 of 13 shooting. He was just 4 of 9 from the free throw line and 1 of 7 beyond the arc. He did have seven assists, but six turnovers as well. Cory Joseph dropped 18 points, the most for the Raptors.

Game 2 of the Pacers-Raptors series is Monday. Tip-off is set for 7 p.m. ET.