What really happened to the Indiana Pacers 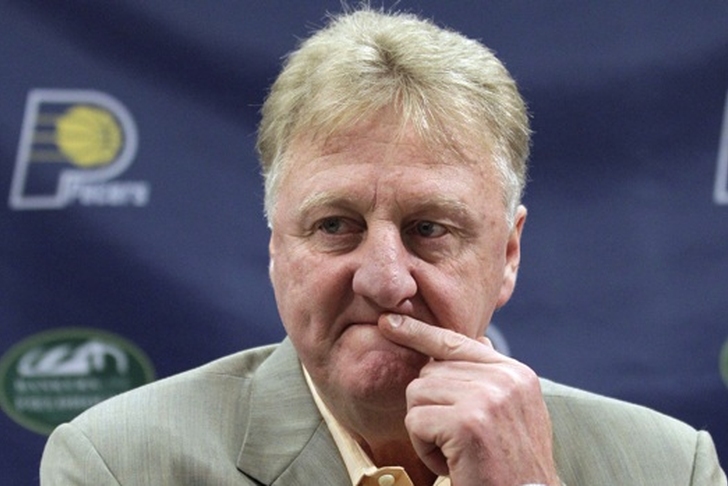 With all the talk of their surefire rematch with the Miami Heat, the Pacers assumed that was the only playoff series they needed to attend.

When the Hawks came to town, the Pacers had already taken off for a relaxing week at Cancun. By the time they got the memo that there were games to be played, it was too late to book a flight back to the States.

Larry Bird came up with a brilliant idea while sipping on a beverage by the pool—players by committee.

“Indiana is the basketball capital of the world,” Bird said. “Surely there are plenty of guys who can fill in. It’s the Hawks, how hard could it be? Hell, I could suit up and beat them.”

The Pacers released a statement a mere six hours before the game offering Hoosiers the chance to fill in the roster for the seven-game series. If they could match the height of a player on the roster, they could play.

All names were to be kept anonymous to protect the identity of the individuals. They were to assume the aliases of the players on the roster for the duration of the playoff series.

One hopeful hoops star missed the height requirement by a mere six inches.

“I was really hoping this was my chance to make it big,” the 5-foot-6 Indiana native said. “But I just couldn’t get C.J. Watson’s jersey to fit right.”

Watson is the shortest player on the roster at 6-feet-2-inches.

The roster quickly filled up, and fans roared as the team came out onto the floor for the opening tip.

The rag-tag team held its own in the first half, but a disastrous third quarter set the tone for the series.

Many criticized Roy Hibbert’s ability to put the team on his back in critical moments late in the game. Little did they know, the real Roy Hibbert was thousands of miles away.

“It’s been a while,” he said. “I tried out because I was tall, and I made the team. I averaged two points per game, and decided basketball wasn’t for me. I figured I would relive my glory days one last time.”

The Pacers regrouped in game two, and even up the series at one game apiece after a stellar third quarter.

The difference? A throwback pregame meal.

“When I played in high school, the team moms always made us great food before the game,” Paul George’s look-alike said, who scored a game-high 27 points. “I decided to bring the tradition back. Nothing beats cafeteria pizza before the opening tip.”

Game three proved to be rough for the squad, as Atlanta shot a scorching 56 percent from behind the arc in the second half.

As Bird watched from afar, he began to worry.

“I can understand opening game jitters,” Bird said. “But I thought they would be able to make adjustments. Don’t these guys realize they are in danger of screwing up history?”

One bright spot for the Pacers in the loss was the emergence of David West’s alias as a threat. The 60-year-old shot 7-for-13 from the field, despite having to take frequent breaks.

“’I’m just not what I used to be,” he said. “I came out of retirement for this, and didn’t realize it would take such a toll on me.”

The teams split the next two games, leaving Indiana in a win-or-go-home situation.

For this squad, that threat takes on a new meaning.

“I was really starting to get into a rhythm with the guys,” Evan Turner’s alias said, despite averaging just over five points per game in the series. “I’m not ready to go home yet.”

Others have different feelings. Hibbert’s look-alike is tired of the negative attention he has been receiving, and feels it is unjustified.

“Look, I’m just trying to do my job,” he said. “These fans don’t realize I’ve scored more in this series than my entire junior high career combined.”

Game 6 is Thursday night in Atlanta. It could be the end of this group’s run together. More importantly, it could mean the (actual) team’s stay in Mexico can be extended by a few months.

The Heat will join them in June.